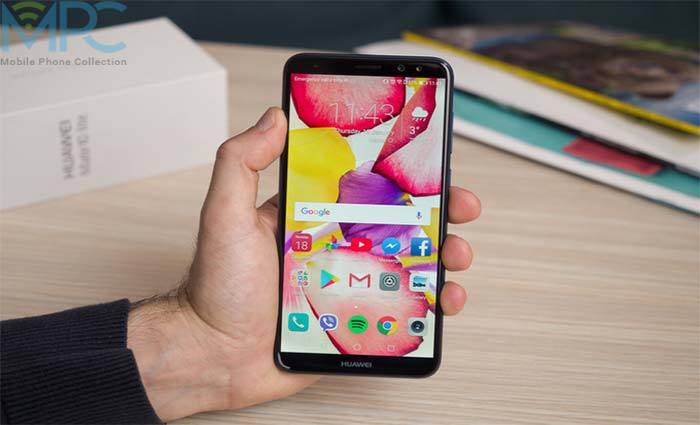 Huawei Mate 10 Lite is one of the best and budget friendly smartphone for the users. This new phone features an18:9 (2:1 ratio) screen and taller than previous Huawei models, which we have seen with 16:9 screens.MPC Team is presenting you a comprehensive review of Huawei Mate 10 Lite. What is the difference between Huawei Mate 10 Lite and previous models? This new smartphone is built with solid metal, and Huawei has its own Emotion UI interface on Android 7.0 Nougat version. With this phone you can find 2-megapixel camera on both sides which gives you a great chance to capture amazing photos with dimmed background – you can find similar photo effects as DSLR camera.

We took our time to experience new Huawei Mate 10 Lite, so we can present you great and powerful smartphone. Read below to get to know about the specifications of this mobile phone.

Mate 10 Lite design is made with premium quality and solid aluminum. One of the eye-catching aspects about Mate 10 Lite is the phone size, which is 5.9-inch screen, but it does not feel big as its physical size makes you feel like having 5.5-inch screen of OnePlus 5.

Our researchers have found an interesting feature on this smartphone, as this has phone fingerprint scanner, and you can unlock the phone by one tap even thoughit ison standby, which is very impressive.  At the back of the phone, you can find main dual camera, which is positioned on right side above the fingerprint reader. You might feel dual camera system is a bit sticking out, but not to worry as it is perfectly centered, so you can put the phone on its back without twisting it.

Secondly, Huawei Mate 10 Lite is not waterproof, so take good care of this amazing and powerful smartphone.

Huawei Mate 10 Lite is perfectly made for all age groups, especially for new generation. Mate 10 Lite has new and advanced features thanprevious phone, and it’s very powerful as well. If you look at bottom of the phone, you will find a single speaker, headphone jack and microUSB port.

Huawei Mate 10 Lite display is made with extensive 5.9-inch screen with aspect ratio of 18:9, which is taller then previous Huawei models, which had been seen few years ago. The screen size feels to be wide like 5.5 inch, which fits perfectly on palms of the hands. Interesting fact on handling Mate 10 Lite, because the screen is curved from sides, is that it makes the phone stylish and makes it differentby making the phone charming, as it is easier to swipe with tip of the finger.

How is Huawei Mate 10 Lite in terms of value and standards?

Mate 10 Lite is built with high standard, premium quality and hence is an affordable phone to be bought. This mobile phone has LCD screen, which does not have lavish colors, which we have seen in AMOLED screen. What’s noticeable about Mate 10 Lite is that it has bluish screen by default, which makes the phone elegant.

Surprisingly, Huawei has developed its own Emotion UI, which is heavily modified by Android interface and takes time to get used to the new interface. We all know that Huawei Mate 10 Lite is one of the affordable Android phones, which anyone can buy at great price. Unfortunately, Mate 10 Lite is going through a phase of Android update, as it will take time to get a new updated Android 8 version, and there is a big question, will there be a major updated on the newer version of Android.

Moreover, if you notice the custom Emotion UI on Android version is very different from Google Design. Researchers have noticed that Emotion UI interface has reformed its visual style by keeping in mind on how iPhone interface looks. What factors have made Huawei improve themselves very quickly? You might not know that Huawei is very much influenced by Apple design choices, such as settings menu, icons, swipe-down action; etc.One of the best thing about Emotion UI is that it functions very well on Android version.

MPCteam acknowledged that Mate 10 Lite is the best smartphone anyone can use as it runs very smoothly on daily basis. Additionally, Huawei has improved their performance a lot, for example if you open any type of app it will open very smoothly at the speed of 60fps and you will rarely find the phone getting slowed down.

The Mate 10 Lite has hybrid dual sim card slot, which gives two options to choose either to insert two SIM cards or insert one sim card and one microSD card.

If you love to take lot of photos, videos or have lot of documents, then this phone is perfect for you, where you can get 64GB and we know that 12 GB is occupied by the system, only 48 GB can be availed for the media and applications. You can also expand your memory by inserting extra memory card.

We are all looking for smartphones that has fast processor, so our internet speed is fast and connected 24X7. Thus, Huawei Mate 10 Lite supports 4G LTE connectivity, which makes the mobile phone faster and supports bands, such as FDD LTE 1,3,7,8,20. All these bands are essentially coveredby all European carriers and internationally as well. If you are planning to buy Huawei Mate 10 Lite, then beassured if your carriersupports these bands in your country. Also, you can find other options, whichinclude GPS, Bluetooth, and dual-channel Wi-Fi b/g/n, but it doesn’t support NFC.

Let’s look at the specification of the phone first. There are two cameras, one is at the back of the phone and other is on front above the screen on right side. Both cameras on front and back are 2-megapixel shooter, which helps to support deep information and it has blurred effect known as Portrait Mode effect. The main camera at the back supports 16-megapixel that offers higher resolution, while front camera supports 13-megapixel.

How is the image quality of Mate 10 Lite?

Our researchers took few photos at day time, which came out amazing with detailed and sharp view. There is a great way to edit the photos and to adjust the saturation and contrast by using the option called “image adjustment”.

Portrait mode can be used for both front and back cameras, where you can blur the background to have a creative effectiveness in the photos. Our researchers took some portrait style photos, and what made them noticed is that they were able to modify the amount of blurriness in a photo.

Unfortunately, the video recording quality is not up to the standards and it must improve a lot. It is disappointing that 4K video resolution is not supported, so that’s why 1080p videos do not look as great as they should be.

The Huawei Mate 10 Lite has a single loud speaker at bottom of the phone, which is set on the quiet side and the quality is just an average. Delightedly, headphone jack is at the bottom of the phone as you don’t have to spend above 10,000 rupees to buy wireless headphones.

During the testing phase, researchers had found the call quality to be great on Mate 10 Lite. The sound in the ear is heard naturally, and the quality is up to the international standards.

The battery of Huawei Mate 10 Lite is average, and it can only last for a day not more than that and the capacity of the battery is 3,340mAh. Our researchers had tested the battery life, and unfortunately the battery will drain before 8 hours and you might have to keep an extra battery for emergency and other purposes.

In conclusion, Huawei Mate 10 Lite has left us with great impressions, such as having cool bluish screen, the design of the phone, andwe were impressed with the premium quality of the display glass. It captures amazing photos in day and night and surprisingly it has great portrait modes which make the photos elegant.