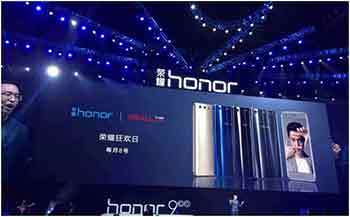 Huawei is the third largest phone maker of the world; introduced new in the Honor series i.e. Honor 9 smartphone. The phone is a prove that a midrange mobile can handle the specs and features of the expensive high quality flagship phones as it can easily compete with iPhone 7 and Samsung Galaxy S8 on features basis.

Looking further, the Honor 9 is a major update in the series to 2016’s Honor 8. The new handset was released on 16th June 2017. Its release got delayed almost a month and during that period we heard so many rumors and leaks, most of them are true. So, if you were following the reports, there isn’t something surprising except for the fact its dual camera is a real deal.

Kirin 960 CPU which is 8 core from HiSilicon paired with Mali-G71 MP8 GPU is another star feature of this camera. That means, the phone is really cool with its processor, more video games, apps downloading and multitasking possible.

Honor 9 first launched in China so price and availability of the phone can’t for forecasted beyond Europe just for now. There do is a follow up event on 27th June in Berlin. Although, handsets are available from 16th June in the major markets. For US market, Huawei hasn’t planned to bring the new Honor 9 but the company statement said, ‘Later this year, you can expect to hear more about new devices that will be available in US’.

Considering the fact that, Huawei Honor 8 was directly selling from the official site so eventually we might expect Honor 9 will be there to place orders.

Early Verdict- Honor 9 features the same specs as Huawei P10 except for the fact that the new set has new design and equipped with 20MP monochrome and 12MP RGB sensors dual camera setup.

Honor 9 has 5.15 inch LCD display where we can easily why the phone is perfectly fits into the notion of mid-range pricing. Unlike Samsung, HTC and many other flagship phones offering QHD displays, Honor 9 screen just offers 1920×1080 output but considering the size of the screen, 1080p isn’t bad rather sufficient for most of the users. Added advantage is that LCD display eases up battery.

New entrant has the same design as of Honor 8. Glass back and a metal frame; back is reflective but not like mirror in fact it diffracts light producing sort of amazing effect.

General updates for the looks of the mobile include a major change. That is, fingerprint scanner is moved to the front of the phone. Honor 9 is 147.3×70.9×7.45mm and weight of 155g, some rumors were saying the headphone port of 3.5mm is intact.

Headphone jack isn’t missing as rumored which otherwise would come as a disappointment for many fans, as critics renders the front, back, top and bottom images of the newly released phone.

Display of the phone is calibrated for DCI-P3 color space, whereas many famous manufacturers don’t put in an effort to calibrate screens properly. If Huawei has calibrated screen for Honor 9 then there is no excuse for the well-known manufacturers left.

Octo-core Kirin 960 chipset which is built by Huawei is the processor of the phone. Fact of the matter is, it is the same chipset you will find in the flagship Huawei P10, Mate 9, and Honor 8 Pro. Four are clocked at 1.8GHz and the other 4 at 2.4GHz. The processor is beastly in performance especially when we compare it with the Qualcomm’s Snapdragon 835, which is the one in Samsung, HTC, OnePlus and many other smartphones. On the flip side, Bifrost Mali GPU in Kirin 960 isn’t that impressive to Adreno 540 in SD 835. Given the price differences with all those phones, if you are thinking of buying this phone, you are not settling for less.

Keeping in mind, the multitasking one can do from this phone, gaming and launching different applications; the processor acts like a smart machine which doesn’t hang, or stuck.

Phone is water and dust resistant but it isn’t confirmed if it is bent-resistant. Such tests might start pouring in as the phone is on the launching pad. For now its just in China but launch in Berlin and Europe would let more and more people to get the hands-on experience and see if it passes the bent test or not.

Storage – Honor 9 has 4GB or 6GB RAM. Also uit has 64GB or 128GB internal storage and a microSD card slot which supports up to 256GB cards.

Software- It runs Android Nougat and overlaid with heavy skin of Huawei Emotion UI. Android Nougat is the latest and almost all of the latest released smartphones have this software up and running with few with more of an updated version.

Battery – It has 3200mAh battery which is quite efficient too. That means, LCD screen display makes it so, as we told earlier. These days flagship smartphones are coming along with QHD screen displays so they consume a lot of battery. Hence, LCD display eats less of a battery in comparison.

Also, Honor 8 has 3000mAh battery and the new Honor 9 has much improved battery work i.e. 3200mAh. A slight improved from the previous version.

DSLR is our good go-to option whenever we plan a trip with friends or want to shot some sort of special event but not the case for every day shoot. We need our mobile phone to be such a champion in producing the same quality results. That seems to be the reason why Huawei teamed up with Leica, the German camera and optics manufacturer in order to deliver powerful dual lens rear camera.

Since the teaming up thing, we all are intrigued to see how different is the camera from other high end smartphone cameras which are equally claimed to be powerful.

It isn’t the flagship phone with dual camera, HTC, LG and Samsung already did that. But P9 has utilized the dual lens differently.

Biggest highlight of the Honor P9 is its camera which is dual lens, 20 megapixel – monochrome and 12 megapixel – RGB sensors. Leica has a history of producing monochrome cameras only, popular one $8000 M Monochrome camera. It helps in creating different contrast levels and captures more light. They are at the back of the phone just like Huawei P10. It boasts 2x optical zoom and has laser autofocus, portrait and bokeh modes. It has dual LED flash too to click in dim or dark with f/2.2 aperture and phase detection autofocus.

Huawei claimed that its monochrome sensor can get 200 percent more of a light. Best results for film photography in black and white. Also it gives excellent results if user converts the originally colored image into black and white.

F/2.2 aperture lens of the phone aren’t the largest ones as Samsung Galaxy S7 has f/1.7 aperture lens. The larger the aperture lens, more the creativity with bokeh or background blur. Galaxy S7 lens diaphragm open wide and allows more light to be able to reach to sensor, hence improves low light performance.

Honor 9 was released on 16th June in China but the follow up events are planned e.g. launch event planned for 27th June in Berlin. Europe and other countries will soon experience to get the hands-on experience. Probably sooner if Honor 9 will be available on their official site for purchase just like Honor 8.

Huawei Honor 9 is available in 3 different configurations in the market. We have converted the Chinese Yuan pricing for the ease. Honor 9 4GB/64GB model is of $338, mid-tier 6GB/64GB model price is $397. The handset with most of the storage space and the top model – 6GB RAM & 128GB storage – price is $441. These prices might not convert sooner as they are slightly higher than the Honor 8.

Huawei Honor 9 mobile has most of the features extracted from Huawei Honor 8 and Huawei P10 as we have seen through the comparisons we’ve made. Except for the design and the camera which steals all the attention when it comes to discussing phone specs. Dual lens camera with monochrome and RGB sensors will let the users to play with their pictures and enjoy more of the possibilities.

Rumors and news leaks about Honor 9 proved to be all true. Although, critics are of the view that they shouldn’t had delayed the launch.

Kirin 960 Processor under the economical price tag truly proves Huawei is targeting the mid-range phone buying market really well. No doubt Huawei, already ranks at number 3 due to its quality manufacturing of smartphones.

Every year we witness, some of the smartest leaks by the company. But it seems like they skip US market purposefully. They have been asked frequently but the Huawei company promised to bring more Huawei devices to the US market this year.