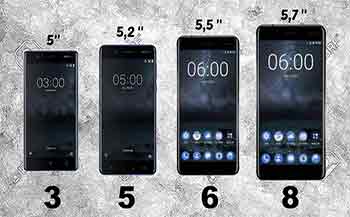 Since the acquisition of Nokia brand, HMD Global has managed to release different Nokia smartphones. The purpose in this regard has been to reignite the passion among people to use Nokia once again as their main priority mobile phone. In this regard, this year we have seen the multiple releases of Nokia smartphones, which feature the famous Android OS and other features that make it comparable to the currently dominant smartphone companies such as Apple, Samsung, HTC and Huawei etc.

In this regard, two recently released smartphones by HMD Global are Nokia 8 and Nokia 6, where the former is the flagship while the latter is mid-range smartphone. This is the premise based on which we are going to develop a comparison between the two smartphones, and simultaneously we can only thank HMD Global to resurrect the Nokia’s long-lost image and reputation. At one end, we have got Nokia 6, which is a budget-friendly smartphone featuring a beautiful design, and on the other end, we have flagship Nokia 8.

Arial view of two phones does not show any major differences between the two, but if you look closely, then there are stark differences. We will therefore help you out in clearing out the differences between Nokia 6 and Nokia 8 so that you can make up your mind about which one to buy.

Since Nokia 6 is low cost, still you cannot just rule it out, as it does feature metal casing and accents. Though it is primarily a mid-range smartphone, but its looks and design do not really make it a much different from the flagship mobile.

However, such distinction will become more obvious once you grab the Nokia 8 in your hand, which has a sleeker chassis, rounded edges and uni-body aluminum construction. So you will actually find the absolute differences between the two smartphones in terms of their looks and general feeling, and there you will find a clear reason for the best design being reserved by HMD for its flagship product, and the design of Nokia 8 is simply a testimony to that.

When we checked the two mobiles for an initial brief period, we could not notice the differences vis-à-vis display. However, the display of both phones produced a sufficient detail from the usual viewing distance. One thing is certainly clear, Nokia 8 will offer a superior display. This is because it has a 5.3-inch 1440 x 2560 IPS LCD display, which is much more superior to the 5.5-inch 1080 pixel IPS LCD display featured in Nokia 6.

However, from a usual distance, it is still difficult to differentiate between the two, but we can still imagine that upon closer inspection the two are different. Another worth-mentioning thing is that display panel of Nokia 8 has been protected by the Gorilla Glass 5, whereas Nokia 6 is protected by Gorilla Glass 3.

Both the phones are running on Android 7.1.1 Nougat, so you can tell that both will have an interactive and consistent user interface, thanks to Android. Apparently, all the phone manufacturing companies have lately been adopting the cleaner interfaces which have a closer feel with stock experiences, and this is not the exception in case of these two smartphones as well. So the strategy adopted by HMD in case of these two Nokia smartphones is quite appraisable.

Another most obvious feature, which differentiates Nokia 8 from Nokia 6 is the camera. Nokia 6 has a 16MP f/2.0 camera sensor. On the other hand, Nokia 8 has dual rear camera, which breaks down to the two 13MP cameras, in which one is monochrome and other is color. Similar to the other such smartphones, Nokia 8 dual camera system will also be able to deliver the adjustable bokeh levels, and hence the photo-centric lovers will be easily preferring Nokia 8 over Nokia 6.

Furthermore, apart from this bokeh mode, the Nokia 8 will also be preferred for its new ‘bothie’ feature, which uses the rear as well as front cameras at the same time for taking photos as well as recording videos. Lastly, the front camera will also favor the Nokia 8 for its 13MP camera as compared to 8MP camera featured in Nokia 6.

One of the most fascinating thing while developing comparison between the two is that Nokia 8 has almost the same battery as that of Nokia 6. The battery capacity in Nokia 8 is 3,090mAh while it is 3,000mAh in Nokia 6. Even Nokia 5 also has 3,000mAh. This means that Nokia is going to be tested on almost the same battery capacity in all the smartphones for now. However, the Quad-HD screen in case of Nokia 8 will surely test its battery capacity as well as longevity, but you must not be surprised if the Nokia 8 battery outlasts the Nokia 6 battery.

Finally, let us talk about the price of Nokia 6 and Nokia 8. This is one area that would instantly help you in determining which phone you should buy, as the price-conscious customers would definitely find the Nokia 6 as most attractive, as it only costs $230. In comparison to that, Nokia 8 will cost you whopping $705. So those interested to buy Nokia 8 will definitely have to look for a lot of good reasons before they take triple the amount of money they will have to pay for Nokia 6.

However, the Nokia 8 price would still be justified for its better design, snapdragon 835 chipset, and dual camera system. This is also because Nokia 6 only features Snapdragon 430 chipset along with single main camera. Lastly, it will also be interesting to see whether Nokia 6 will perform better than Nokia 8 in any area of not. Therefore, a proper comparison between the two involving a comprehensive review will be necessary for uncovering more differences. For that, stay tuned to Mobile Phone Collection.